Princeton ISD played host once again to the regional Special Olympics track meet with seven school districts and more than 175 athletes competing in the day of games.

“It is an amazing opportunity for Princeton to host this event to bring the community together in support of our Life Skills students,” said Kathy Johnston, who coordinated the Special Olympics meet with Southard Principal Richard Boring and PHS Life Skills teacher Ashley Caldera. “The students oftentimes feel like they get overlooked, and this gives them the opportunity to show off for their family and friends and have fun doing it. It allows all levels of capabilities to participate in an athletic competition.”

Mrs. Caldera said the athletes were thrilled to be on their home turf.

“It’s hometown, home crowd,” she said. “They were super excited.”

“Our students are so excited to get to participate in this competition at the huge Jackie Hendricks Stadium,” she said. “They look forward to showing other schools what Princeton can do. They know that it is an important event that they get to be a part of and can’t wait. They ask every day if it’s time yet.”

Organizers say the kids keep them motivated to host this event.

“The simplest reason I love to do this is the kids,” Mrs. Johnston said. “The joy they have by getting to compete and win a medal or ribbon is indescribable. I would say the highlight of my day is the kids. They are the reason I do what I do.”

Local Special Olympics officials say this track meet would not be possible without the outpouring of student and community volunteers.

“Not only do we use volunteers who are great role models, the students who we choose to work with our Life Skills students usually make an effort all on their own to get to know our Special Olympics athletes,” Mrs. Caldera said.

In addition, they serve important roles throughout the event.

“Volunteers help in many ways,” Mrs. Johnston said. “This includes everything from cheering on athletes, timing runners, measuring distances for shot put, javelin, softball throw and tennis ball throw, escorting athletes from their event upon completion to the awards stand, running waters to volunteers, taking lunches to the different schools for their athletes and coaches and manning the face painting and temporary tattoos booth. So many volunteers are needed to have a successful event. I can’t say enough about how much they do and how much I appreciate their time.”

The dance team captain was excited to have the Claw Crew there to welcome the athletes to the competition, alongside the drumline and cheer.

“It is fun to cheer them in and give them high fives and watch them smiling,” said Samara Hight. “It is heart-warming.”

Volunteers are happy to be part of the event.

“Our job is to make this event all about them,” said PHS senior Presley Gee. “I always like to see the different teams come together to help with Special Olympics. It’s the best way to come together as a community.”

Southard athlete Beto Sauceda uses his own passion for sports to assist with Special Olympics.

“I’m a runner, so I like helping them with running,” he said. “It’s fun because they get to learn something new, and I like watching them have fun.”

“I like hanging out with them,” Audrey said. “It’s not just about helping them, because they can teach you stuff you don’t know, too. They show us how they can overcome and deal with their disabilities. And it shouldn’t matter that they have disabilities, because everyone deserves to have this kind of fun.”

Mrs. Caldera described the highlight of the day.

“It absolutely has to be the look of pure joy and accomplishment on EACH of the athletes’ faces,” she said. “No matter what place they come in, no matter what school. It never gets old. And the fact that everybody comes together to cheer on everyone. It’s unity at its finest.”

Zachariah Allen and Sergio Moreno congratulate each other after the relay race ends the day.

Jamie Jordan gets some air in the long jump.

Track athletes keep the time for the relay races. 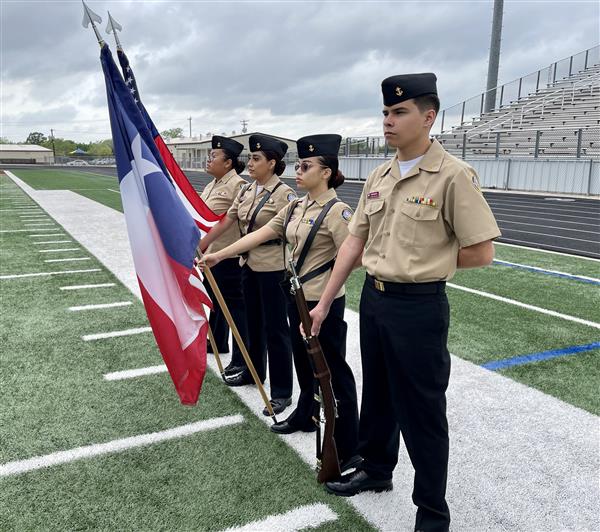