Meat of the matter

It's time to revive reality TV's "BBQ Pitmasters," because there's a new contender in town as the Southard Middle School after-school barbecue club has stepped up to the grill.

The barbecue club is the brainchild of history teachers Adam Lambert and Robert Brown.

Principal Richard Boring encourages clubs at the school to get the students involved in something that interests them. 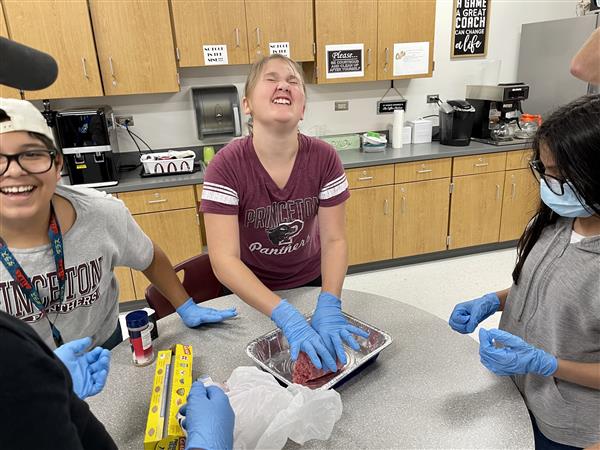 “I got interested in grilling and barbecuing because I was tired of eating bad barbecue,” said Mr. Lambert, one of the club’s sponsors. “And I wanted to show the kids the right way to cook. This is a unique club so it was easy to get some kids interested. They see their parents doing this, and they want to emulate them, so there is already interest there.”

The students got their first taste of their culinary efforts recently as they debuted their grill talents making smash burgers on the griddle.

"I'm not gonna lie, I feel a little bit like Gordon Ramsey right now," 7th-grader Maddox Obera said as he stepped up to the grill to smash his burger. “I’m ready to learn, but I’m mainly ready to eat.”

Students got involved in the extremely hands-on club for several reasons.

“My dad does a lot of barbecuing so I wanted to learn what he’s doing,” said 6th-grader Mason Williams. “I need to find out how to make the best ribs.”

Jackie Hager wants to learn some of the barbecuing techniques so she can provide a special dinner for mom.

“I thought it would be fun to barbecue for my mother for her birthday as a surprise,” said Jackie, who is a 7th-grader. “This is also a good hobby to learn.”

In addition to hobbies, there is the competitive aspect to the barbecue world.

“I got involved with the club because I like barbecuing with my family, and we compete in cooking contests,” said 7th-grader Emma Parker. “I’ve already cooked ribs, and I created my own rub, which came from a bet when someone said, ‘I bet you can’t make this rib rub,’ but I did.”

Although she wouldn’t give away her secret recipe, Emma did reveal it was a mix of brown sugar, garlic and smoked paprika.

There are some logistics to work out with the barbecue club for students to get the most out of the instruction. 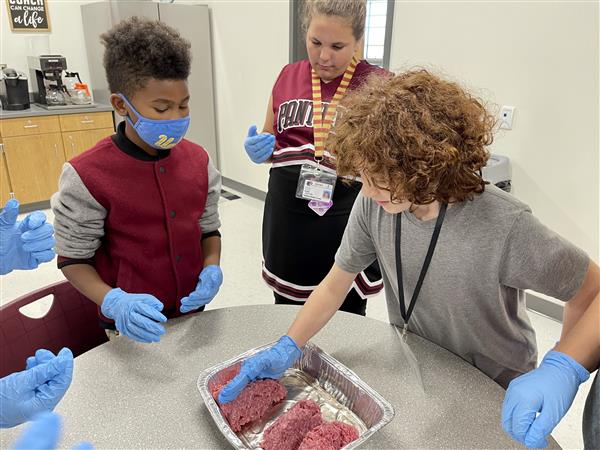 “We are working on how we can manage to get a brisket cooked that takes 16 hours on the smoker,” Mr. Lambert said. “We could probably start cooking ribs before school one day and maintain them throughout the day, but we’ll have to figure that out.”

Although cooking is at the top of the list of club activities, Mr. Lambert said one of his goals is to instill a desire to serve others.

“This will be a great way to show kids how to give back to others, because this is a mindset many kids are lacking,” he said. “If I can teach them how to serve others through food, I will have achieved my goal.” 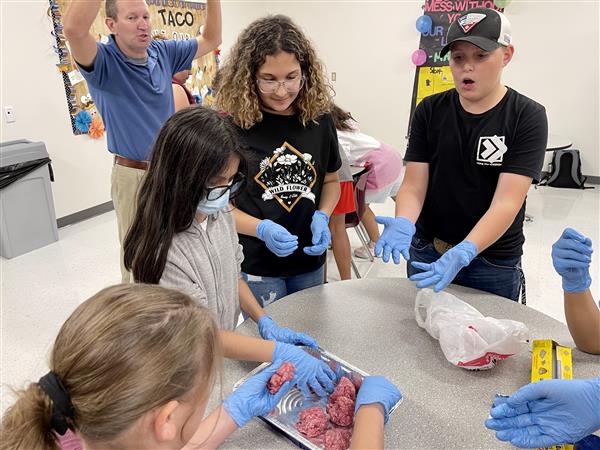 But don’t think there’s not any education involved just because it’s a barbecue club. One of the first meetings featured fractions, safety precautions and proper internal temperatures.

“Focus on dividing the meat equally,” Mr. Lambert told the students. “If you don’t use math to properly divide the portions, the burgers won’t cook evenly.”

Aside from cooking and helping others, plans for future meetings include tours and guest speakers.

“We have plans for a butcher and a pit master to come talk to the students,” Mr. Lambert said. “We don’t want all their interactions with barbecue expects to be through YouTube. There might even be a tour of some legendary barbecue places, like Hutchin’s, which is now on the map as some of the best barbecue in the state.”

Jackie Hager dives into the beef to begin making patties as Michael Green waits his turn.

The barbecue club members don their grilling aprons to prepare for burger making after school.

William Smith is the first barbecue club member to smash his burger on the grill.

Mr. Lambert shows the students how to smash a burger on the grill.